Slow satellite fix! Is there a problem?

PLEASE NOTE; THIS INFORMATION ONLY APPLIES TO THE HN6 AND HN7 MODEL NAVIGATORS.

Sometimes, the Navigator seems to take a while to get a satellite fix. Could there be a problem with it?

In most cases, the answer is no. But there are many reasons for slow GPS signal acquisition.

This article tries to explain what your GPS has to do to find where it is, and possible reasons why the process may sometimes take longer than at other times.

Try changing the GPS location in your vehicle.

If you have other devices, for example:

Either remove them, or turn them off to see if it makes a difference. Some of these types of devices can cause interference.

In the iGo street navigation software, check to see if you have track recording switched on. If you use track recording in iGo, be aware that over time, it can accumulate a large amount of data, and can cause the software to run slower, AND cause GPS satellite signal acquisition times to be much slower.

See this article for info regarding this:

How does GPS work?

The GPS (Global Positioning System) in use today was originally constructed by the US military and became operational around 1995. There are some other systems which are either partially constructed or still in development, but we'll forget about them for the time being.

The GPS system currently has over 20 active satellites in orbits inclined at more than 50 degrees to the equator. The satellites orbit about 20,000km from the earth's surface and make two orbits per day. The orbits are designed so that there are always 6 satellites in view, from most places on the earth.

GPS is a very complex system, but the basic concept is quite simple.

Most modern GPS receivers will track all of the available satellites simultaneously (depending on the number of channels the receiver has), but only a selection of them will be used to calculate your position.

Sometimes, the almanac may become corrupted on a particular GPS device. If the almanac becomes corrupted, it may affect the ability of the unit to get a sensible satellite fix.

If this happens, you should use the GPS reset option to clear data, and start the unit downloading new data from scratch. Most GPS units have some function which allows you to clear or reset the GPS for this purpose.

Your Navigator has a screen, (HN6 example shown below), which shows which satellites are in use. The bar graphs show the strength of the satellites that the GPS has acquired.

To get to this screen, tap the Setup icon

then Tools, then GPS Info

If the bar is blue, the GPS is still downloading the ephemeris. The circular plot shows the location of the satellites in the sky - the centre of the circle is overhead. 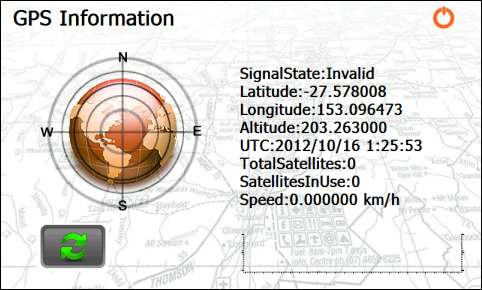 The bars show the satellite number, and the relative signal strengths of the different satellites.

Note in the image below that the satellite shown in red is not in use at all, as there is not enough signal to get any data from it. 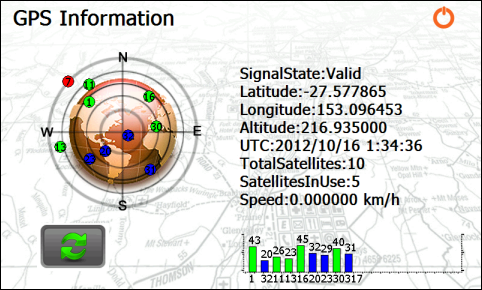 In the example below, the satellite which was red in the previous image (number 7), is now blue, and may eventually go green. 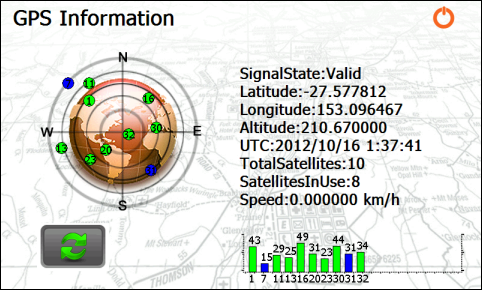 When you switch the GPS on, the time-to-first-fix (TTFF) varies depending on how long it is since you last used the GPS. To get a fix, the GPS receiver needs a valid almanac, initial location, time, and ephemeris data.
The terms "cold/warm/hot start" indicate how many of these pieces of data the GPS receiver already has. The terms mean different things to different GPS manufacturers.

If the GPS not been used for a long time and/or has moved several hundred kilometres it will take some time to get the first fix. In this state, the GPS receiver does not have a current almanac, ephemeris, initial position or time. Older GPS units may take up to an hour to search for satellites, download the almanac and ephemeris data and obtain an initial position, though newer GPS units may require much less than this.
If the GPS receiver has moved several hundred kilometres, its assumptions about which satellites to use will be incorrect and it will have to search for them. Most units will let you enter an approximate location to speed the process.

Current almanac, initial position, and time are all valid. Ephemeris data is either invalid or only partially valid. Time-to-first-fix is likely to be 30 seconds to 2 minutes depending on satellite availability and the type of GPS receiver.

If the receiver has been off for, say, less than an hour time-to-first-fix will likely be 5-20 seconds.

What does all this really mean?

If the GPS has been recently used you should get a fix almost immediately. If it hasn't, put the GPS outside with a clear view of the sky and have a cup of tea.

If you have a GPS in a vehicle, it's better to wait for the unit to get a fix before driving off. Receiving ephemeris data for a satellite takes 30 seconds. If you momentarily interrupt the signal during that time the GPS it could take up to a minute more to get the ephemeris for that satellite as it has to start over. If you drive in an area with tall buildings or other obstructions it may take a long time to get the ephemeris data, for four satellites, that is needed for the first fix.

The accuracy of the position your GPS reports is influenced by a number of factors, such as the positions of the satellites in the sky, atmospheric effects, satellite clock errors and ephemeris errors etc.

GPS units often show on the screen an accuracy figure. Under ideal conditions, this may be 5, or even 3 metres. Manufacturers are vague on exactly how this figure is determined and it would be unwise to take this figure literally.

You'll get a more realistic figure by looking in the specification section of your GPS receiver's user-manual. Typically, with a handheld GPS, 95% of horizontal GPS positions will be within 10 metres of their true location. The error in altitude will probably be at least twice the horizontal error.

The accuracy of a GPS can be improved by using secondary data from external reference stations.

Many consumer GPS units can use WAAS (Wide Area Augmentation System). WAAS uses a network of ground-based reference stations. Readings from the reference stations are used to correct for some of the sources of error mentioned above. The correction data is sent to geostationary WAAS satellites which transmit them back to WAAS-enabled GPS receivers to improve position accuracy.

Differential Global Positioning System (DGPS) is a similar system. The data from ground reference stations is transmitted to the GPS using longwave radio, FM radio, or even cellphones.

A-GPS is a way of improving the time to first fix, or even allowing a fix in conditions where the GPS might not otherwise be able to function.

It is often used in GPS-enabled cellphones, like the iPhone or Android phones.

An A-GPS device will use a data connection (e.g. 3G on a cellphone) to contact a server for assistance via the internet. The server can supply almanac and ephemeris data so the GPS doesn't have to wait to receive them from the satellites. The server can also send an approximate location derived from cellphone towers, allowing an immediate fix.

In some cases the A-GPS device may send incomplete GPS data to the server for processing into a fix.

If you wish to find out more, try searching using Wikipedia or Google